Let me first begin with a disclosure. What you're about to read is all a theory, an odd theory or conspiracy. We'll call it "The Oddspiracy" and I think I've solved it. In 2018 Jaden Smith and Tyler, the creator had told the public that they are dating, not that there's anything wrong with that,

It's just out of nowhere and seems too convenient. Tyler was and still is a controversial character; some could call him a light hatred provocateur based off of what he was rapping about in the passed. Based on that, I'm not convinced he's gay.

More power to him if they are really dating, my notification will forever be on for him but knowing his genius ways, I have become skeptical but with a smirk on my face; I think I've figured out their elaborate plan or reasons.

Lets brake down the possibilities

My trans friend from work asked me to listen to Tyler's - Flower Boy for proof of his sexuality. The first place I went to is Genius.com and Play Music. In an interview with Matt F, Tyler states that when talking about boyfriends, he's making a figure of speech.

" Earlier today, Tyler followed up that comment with a tweet that claims he was "single" at fifteen, and that his boyfriend comment was just a "figure of speech" in order to get listeners, as well as those who may be whispering to each other about his love life, to be more open-minded. Whether or not he's telling the truth about having a previous boyfriend one way or the other - and frankly, it's none of our business - it's just another example of how forward-thinking an artist he is, especially when put into the context of a hip-hop culture that's still at least mildly uncomfortable with non-heterosexual partnerships."

Already, I did some research and I'm seeing signs that point to him always being gay or bi. According to Trey Alston of Revolt.tv, when they asked him a question about sexuality and his 4th album Flower Boy, he responded with.

"It's still such a grey area with people, which is cool with me," he revealed. "Even though I'm considered loud and out there, I'm private, which is a weird dichotomy. The juxtaposition of loud and quiet is weird."

It's probably not that deep but if I were to think like a computer, zeros, ones and the whole nine, this response is still vague on whether he's gay or not. On Hot 97's talk show with Dj Funkmaster Flex, he mentioned a few things that would lead anyone to think he was gay.

Stating your level of privacy is not related to sexuality though in context it's possible. A "loud and out there person" may be hinting to sexuality but it's not technically a bull's eye. Hints and possibilities lead us to gray areas. The results we get from Google as of 2019 when we type in: "Who is Jaden Smith dating" is telling, however, Jaden smith had been seen numerous times with a female lover.

Nice try Jaden, but if you wanted to convince us you're gay, these images are the first giveaway. If Tyler wanted to convince me that he was gay, he would have had to do it without Jaden being in on it. Since Jaden is clearly straight and has no interest in men, I'll assume Tyler is also straight. With Tyler, there are a few things that I question but those things aren't substantial or can be explained. Jaden and Tyler have something in common and Is follow through.

They probably came up with this backstage or days prior. The day that I see Tyler and Jaden walking around, holding hands and kissing passionately, then I'll be convinced. As of now, they are straight joking and I'm laughing with them.

In the past, we all knew Tyler threw around the word "fag" like snowballs. Since I'm not gay, I never thought twice about it. It was just another adjective or state of being and it still is to this day. According to Jacob Stolworthy of Insider.com...

It is currently not clear whether the pair is actually dating or whether Smith was poking fun at speculation surrounding Tyler's sexuality. In his back catalog, he was heavily criticized for his use of the word "faggot." However, on his last album Flower Boy, he discussed his sexuality in what appeared to be a breakthrough moment and has since been more open about his refusal to accept labels.

This has to be some kind of genius in the works here. If it's not clear, maybe he's using the fact that we don't know his true sexuality as a way to play with the human nature that we want to know everything about what we are interested in. If this is the case, we may be witnessing a creative loop-hole to have the LGBTQ audience love him after offending the Gay Mafia.

He walks through any territory

At the beginning of his career, Tyler was a controversial topic. Lyrics, like grabbing guns and killing kids, had people glancing at their blacklists just in case. His first TV appearance was on The Jimmy Fallon Show. The special was called Tyler, The Creator and Hodgy Beats. He came out in a white hoodie and high-top socks with the green mask. Talk shows and platforms were cautious about showing up with their brand.

When Hot 97's Dj Funkmaster Flex interviewed Tyler, he mentioned that when he began, he was insane and out of his mind. Tyler was and is still "Hungry" for expansion of his music, film, fashion and culture of the future aggressively and almost crazily. Crazy enough to know what it felt like to come out of the closet given the unique era of opportunity. To play things forward and poke fun, t 1:18:00 of that interview, he stated

"I like it when you smile when you talk about shit you love."

The way he sounded when he said that pushes me in the direction that he may be gay and this is on multiple occasions in the interview; even the parts where he was talking about how he wanted to meet up with a guy for ice-cream sounded genuine however, he slipped in an ex-girlfriend, so for me... It's not enough. The next thought would be back to the Gay Mafia's blacklist. There is no doubt that Tyler had evolved over the years. He had evolved in music, fashion and film. 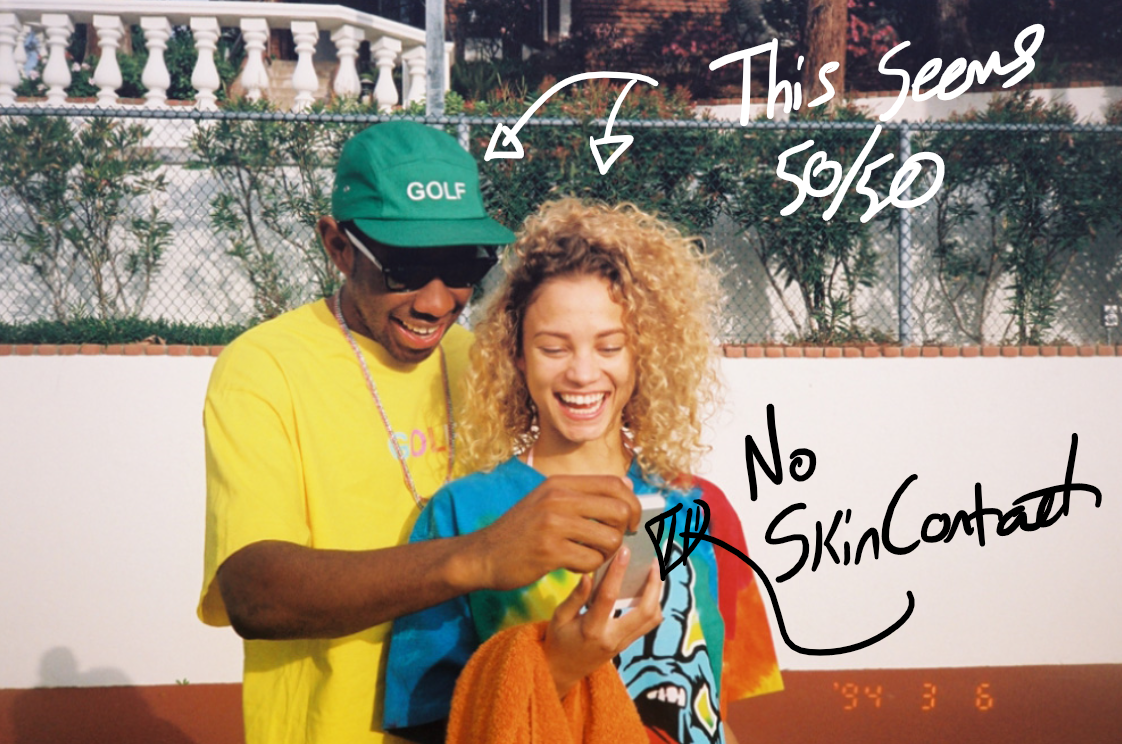 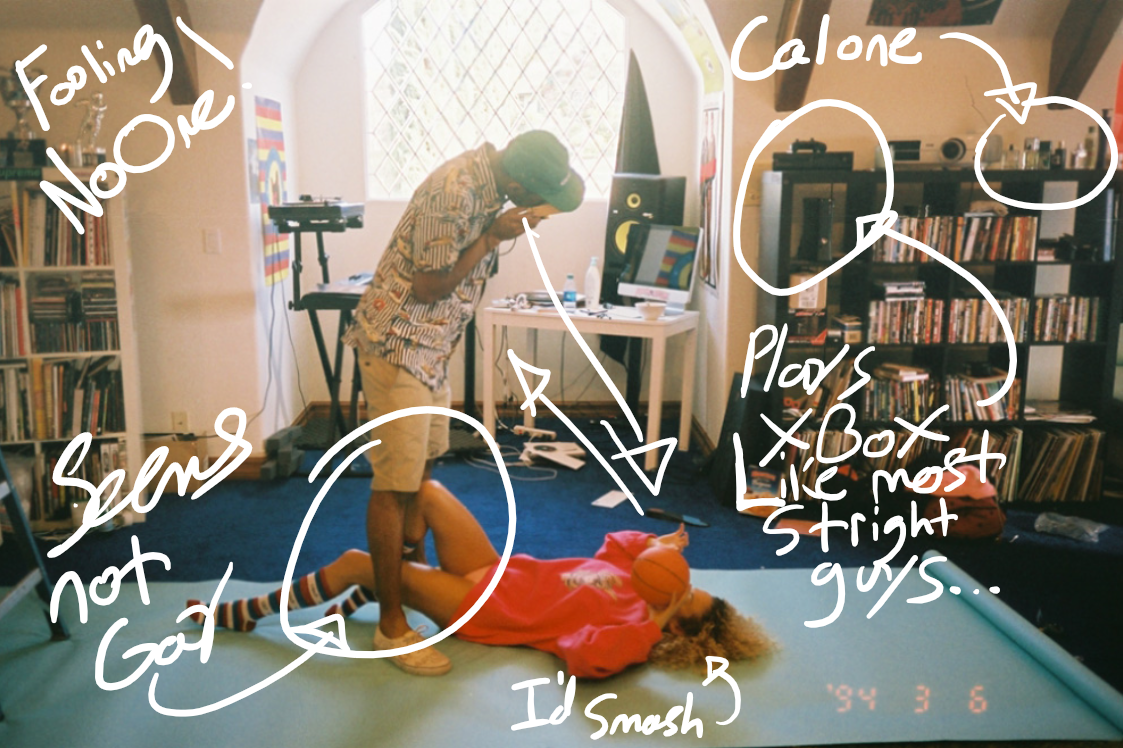 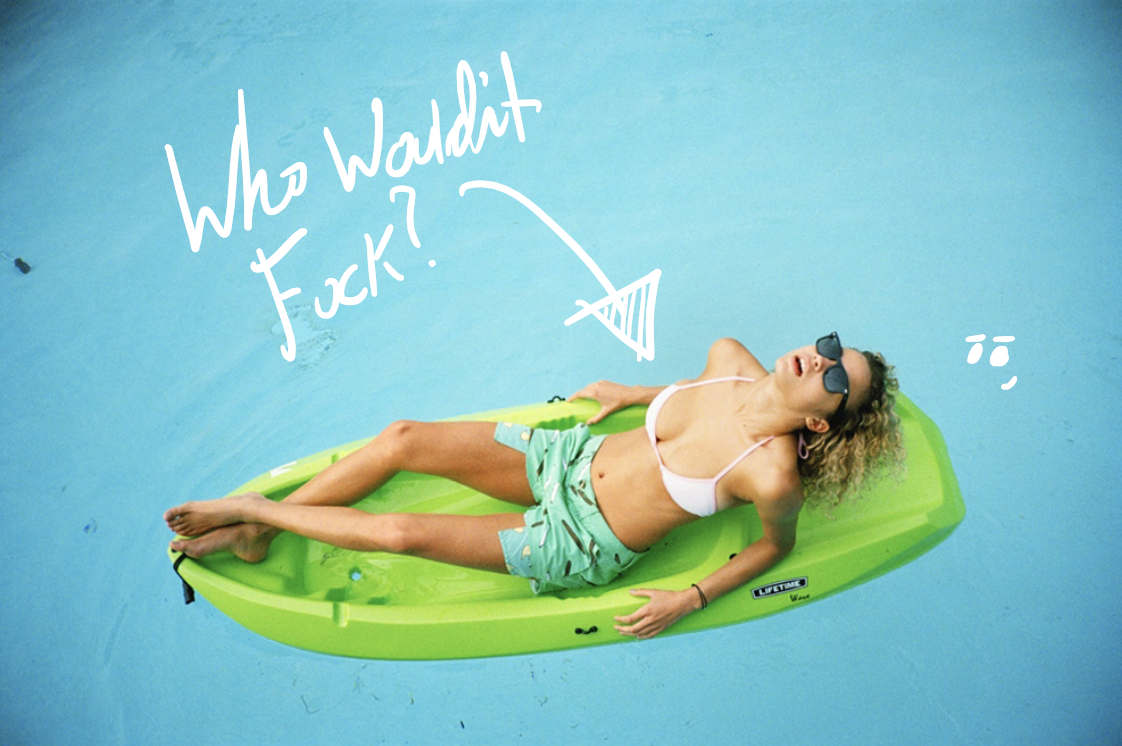 Tyler may have been on the black list. It's not like it's online or written like the constitution; maybe it is, but the black list is what Hollywood insiders use as a way to never do work with you effectively staving you till you give up. Either it's for political reasons, personality characteristics or one big mistake, you never want to be on the black list in Hollywood.

Hermione Hoby of The Guardian writes that Okonma's

"rape and murder fantasies(are) graphic enough to send the vomit rising along with the bile."

Even if people think he's homophobic, Tyler supported Frank Ocean when people began digging up his passed and saw he was attracted to men.

Luckily, the black list does not extend across all of Hollywood however, it extends over a big chunk. TV, Film, Fashion, Music, Talk Radio/Podcast networks all have their own list. If black listed in one industry, jump to the next. It's almost as if Tyler is going to come out of the closet again to tell us that he's actually straight and wanted to stick it to his opps who black listed him in the beginning of his career. I don't know that for sure but It's the closest thing to my hypothesis. Tyler has his hands in almost all facets of media. He created GOLF WANG, he created Odd Future, he created WOLF, he created and directed his music videos. Tyler really lives up to his name. He's a genuine creator. He goes beyond not punting all your eggs in one basket, he created the basket. If the black list theory stuck, he would not have been this successful.

At the end of the day Tyler, the Creator is 100% interested in girls. The news that will finally put this myth to bed is from Larry King's talk show. At 45 seconds in, Larry King asks Tyler...

"Of course, I love freckles, I love Jennifer Laurence; if you're watching this, leave the nigga you're with!"

In an other Hot 97 interview at 9 mins and 37 seconds, Peter Rosenberg asked him a question.

"Do you just love vinyl because it rhymes with Lionel?"

Despite having on a gay pride t-shirt, Tyler responds,

"I love Lionel no-homo, that's my nigga, I'd catch a body for him.

If Tyler was gay, he wouldn't have to use the phrase "No-homo" to justify his sexuality. The evidence is loud and clear. It's safe to say that Tyler, the Creator is straight.

"Fact or fiction, real or unreal?: You lost your virginity on your grandmother's bed."

"I don't want to go in to detail but yeah"

If you listen longer, when Big Boy refers to who Tyler was intimate with as "She" he was doesn't correct Big Boy to "he." Tyler seems proud of it.

At 42 mins and 32 seconds of Big Boy TV, Tyler is asked, Have you ever been in love?

"I was... I think so when I was 17, this girl I wrote a lot of songs about and I use to drive passed her house just to see if the light was on and she was my... she was the background of this phone that I had that didn't work."

Long story short Tyler is straight and is only playing with the media for fun.

I'm not gay, I just wanna boogie to some Marvin

It's crazy how many people, wish, hope and want him to be gay. Sure, there are cryptic messages in his music suggesting otherwise but in rap/hip-hop, words in context like the ones he used in his more recent album are usually taken metaphorically when juxtapose with how Tyler carries himself outside of the studio. By doing this, we can see how potent ideas of how people want a character to be represented by a particular type of person in society. If Tyler made this conspiracy to be controversial and have us talking about it, IT'S WORKING!

Last thing: Seriously, if you are guessing this hard to find out his sexuality after reading this much evidence of how straight he is.... you *wish* he was gay.

TOP 8 Pet Peeves In Any Relationship